Europe Crossfit Regional to be held in Berlin (Northern region)

This is something Craig Richey said in his last vlog on his Youtube channel, TeamRICHEY, but he sounded like he knows something for a fact.

Let's see if Crossfit Games will confirm Berlin as the place where the new Regional will take place.

youtube.com CrossFit Games host Rory McKernan traveled to Ireland to get to know the CrossFit community and attended a ceremony that celebrates their CrossFit and Weightlifting communities.

Was this the last year we saw the CrossFit Liftoff?

CrossFit is making a big fuss about it, commenting and presenting it as if it was a big thing. But lots of voices simply say it was a poor event that was not presented well, not promoted by the box owners and overall just a big flop.

Plenty of people complain also that their scores were not validated so this was the last attempt to do the Liftoff.

Is it the end for this event?

The 2018 CrossFit Games schedule is up

THE OPEN will take place:

THE REGIONALS will take place over the course of 3 weekends: MAY 18-JUNE 3

Check out the changes that were made to the Regionals.

A heartwarming letter to his younger self written by Noah Ohlsen

morningchalkup.com A beautiful, encouraging text about patience, acceptance and perseverance addressed to his 15 year old self. Sounds like we should all sit down and write a letter to our younger selves. "Go with the flow. Everything is ALWAYS going to be okay. From the test you’re freaking out about to the swim meet to the homecoming dance with that cute girl. As long as you do your best, it’s all going to work itself out the way it should. Believe that. I promise that it has for us up to this point. Eleven years down the road, believe it or not, you’re going to have fans that you inspire. You’re going to get to travel the world, support your family, and create incredible and powerful memories. It’s all coming your way, my man. Enjoy it and remember, “Nothing replaces hard work.”"

More on the changes in the CrossFit Regionals 2018 format 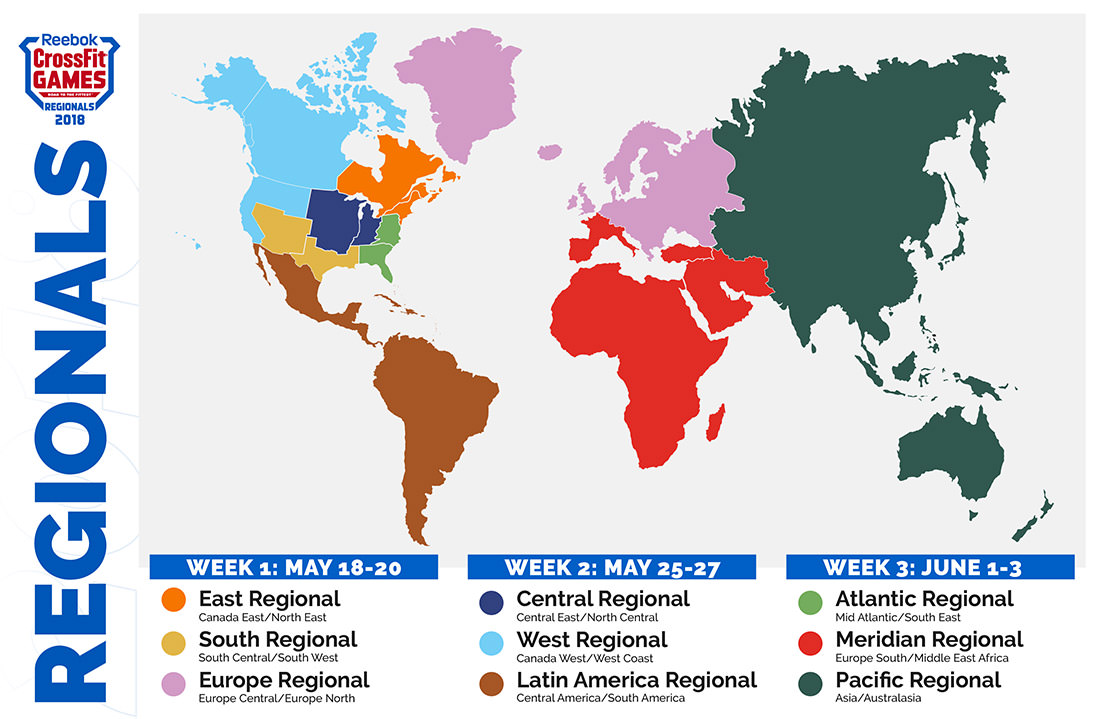 This gives us a better idea of how the Regionals will look like in 2018.

Probably the biggest change comes from splitting Europe into two Regionals. So we will see the Dottirs & Sons compete against the Brits. And we will see a lot of Middle East & Africa in the Meridian Regional. But we still don't know what locations they will be in. Madrid will probably stay the same, and my money's on London, Manchester or Berlin for the second one.

Latin America will include Central America & South America. But there's only going to be one spot at the Games for these guys.

And, as we already knew, teams will be made out of four members, not six.

Here's all in detail:

The third fittest man on Earth, Patrick Vellner joins Julie Foucher's Pursuing Health podcast and opens up about the controversy surrounding Ricky Garard getting popped for using PEDs and his perspective on how that affects the sport of CrossFit.

Noah Ohlsen does Grace unbroken in 1:16

instagram.com CrossFit Kova is open and Kara's excitement is through the roof. This is part of her interview for 7 News Queensland about the opening.

Fire at the Froning ranch

instagram.com While organizing a race at the CrossFit ranch, Rich had his Dodge catch on fire. Nobody was hurt and although the fire spread in the yard, it was put out fast by the firefighters squad.

Froning and Fraser talking about Mat's move to Cookeville

youtube.com Froning & friends Episode 5 is on and it's all about Mat Fraser's relocation to Cookeville.

The story of this year for Kara Webb. Here's a podcast with 2nd fittest woman on Earth

brutestrengthtraining.com "In my eyes, my greatest achievements this year have nothing to do with my placings. That was just a cool reflection of all the hard work." 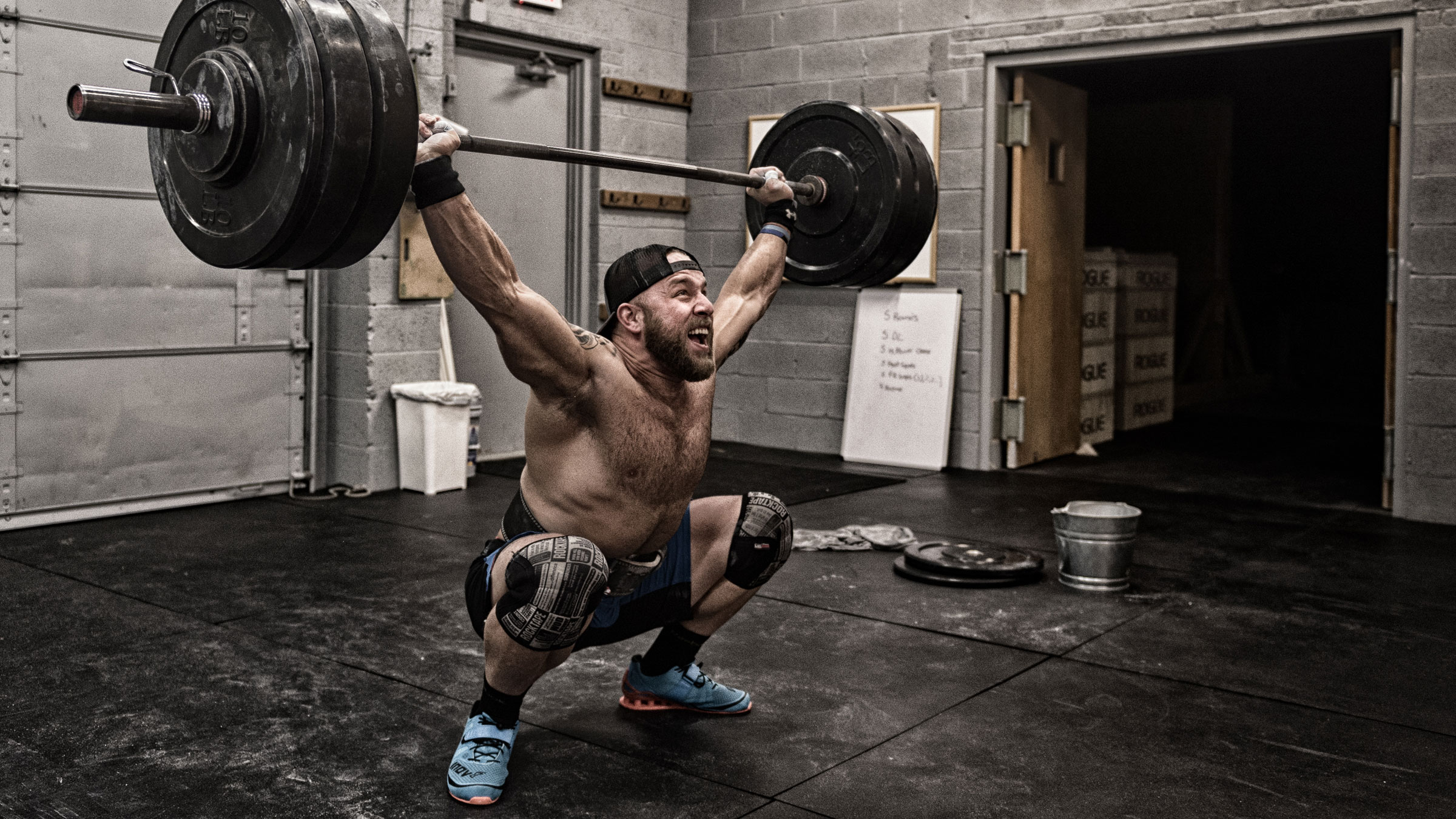 Good news: you can compete at Worlds AND in the Liftoff at the same time

youtube.com Sevan checks in with Pat Sherwood about the evolution of the Liftoff competition, as well as his military background. No podium, no crowd, but Patrick Vellner finally got his 3rd place Games medal

facebook.com ...at the Invitational dinner party

Froning & friends podcasts: 4 episodes are on 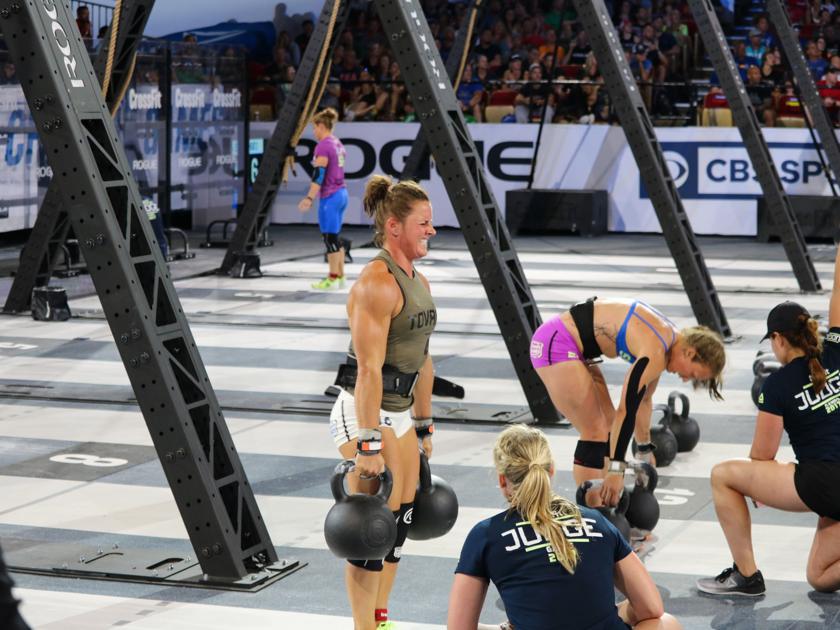 Rich Froning Tore His Meniscus The Week Before Regionals 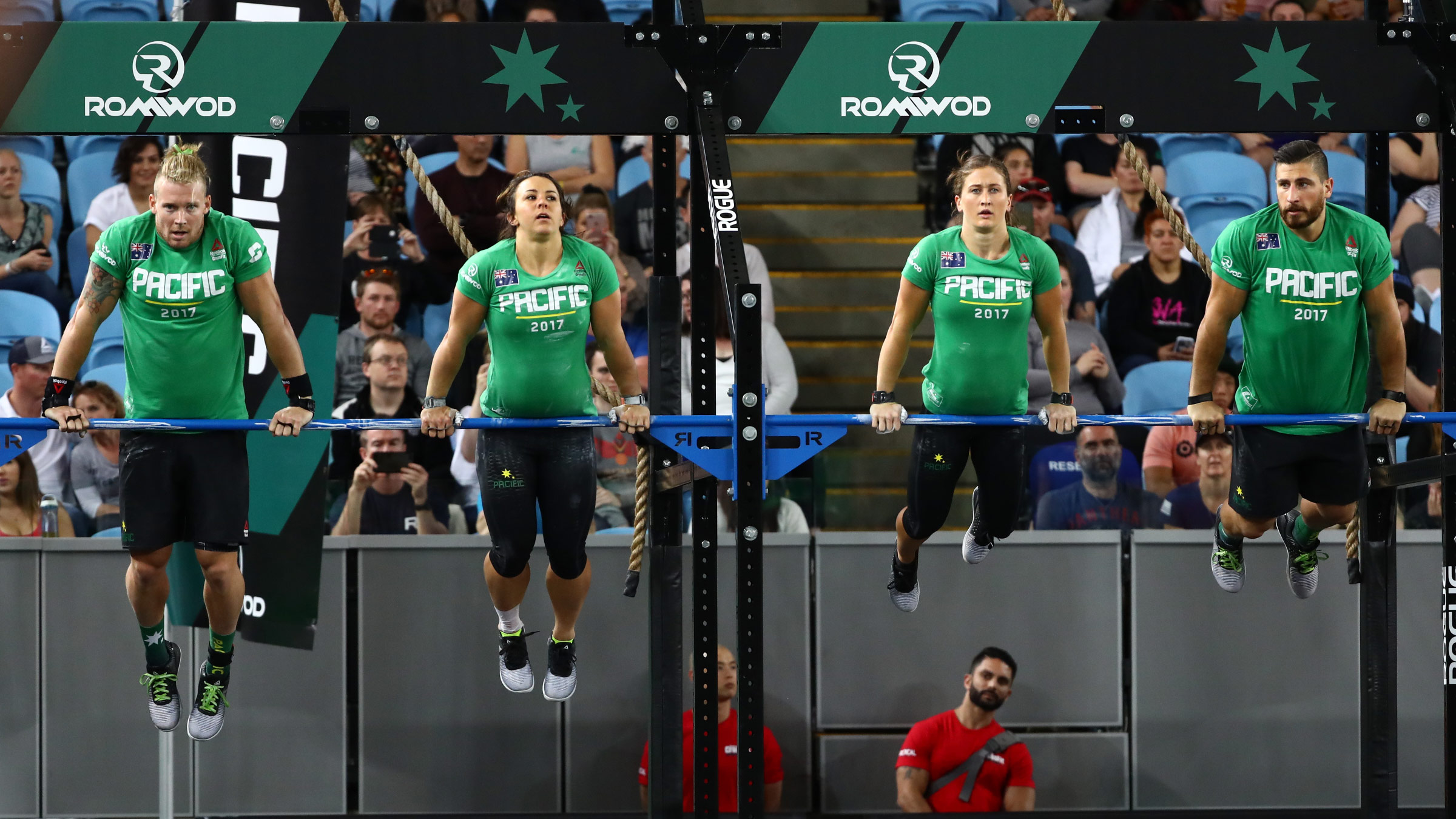 Latin America gets lots of praise, but only one spot at the Games... Who's gonna win the Invitational this year? Lucero hurting his left pack in the California Reguonal

Anna Tobias is switching to competing in the Team category

Murph on the Great Wall of China, typical Josh Bridges 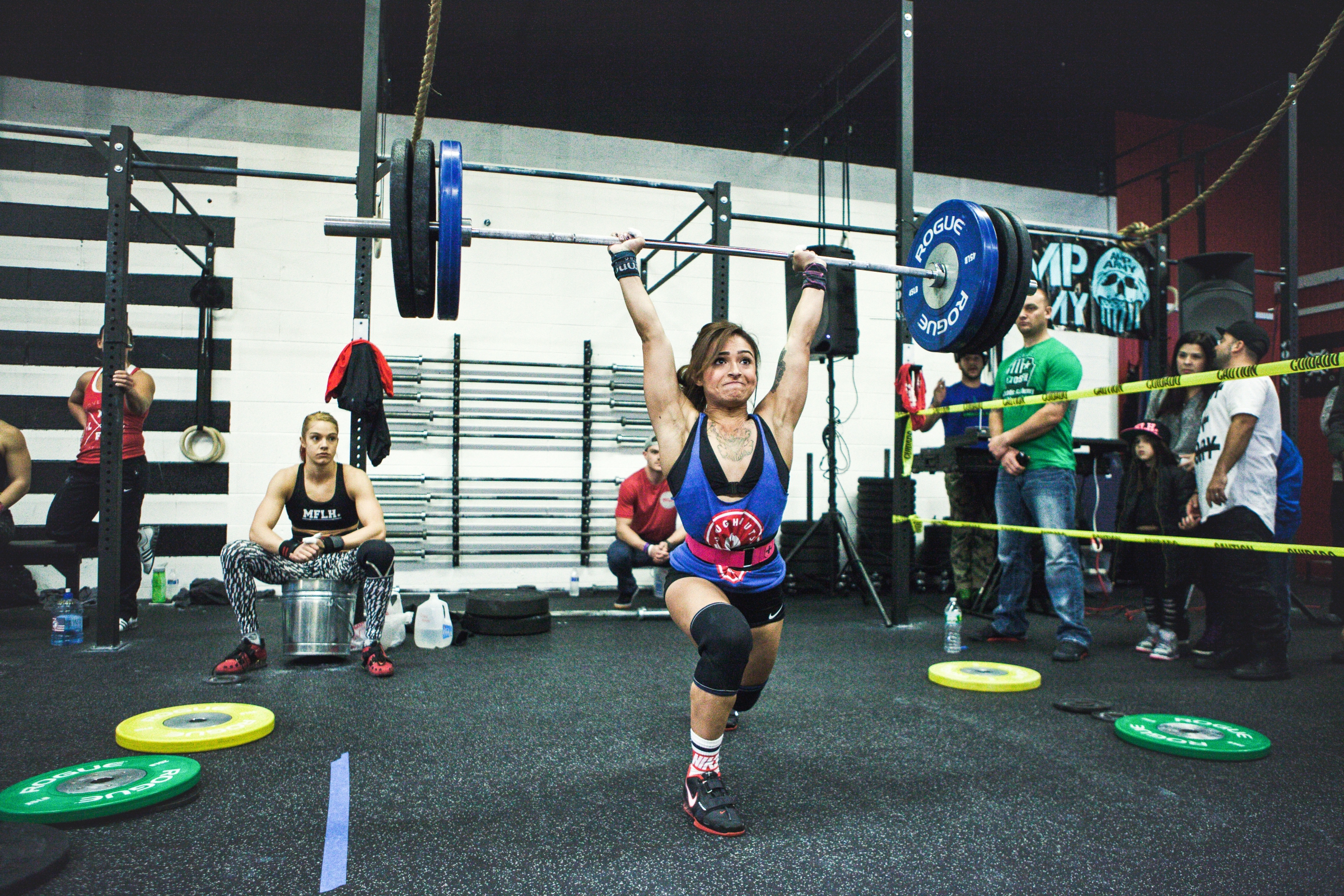 If you like lifting, this one's for you: The 2017 CrossFit Liftoff

Chat with Adam Neiffer, USA Team coach for the Invitational

40% on Games Apparel by Reebok with code GAMES40

Guess who got this one? 550 pounds squat: Ben Smith vs Adam Klink boxrox.com They were unable to provide sufficient video footage of the workout requested and will drop to 63rd place overall... This sucks! At least no PEDs alert.

youtube.com Besides, Dan Bailey got invited to talk in church 7 times since the last CrossFit podcast... Ricky gets a bit too much attention, doesn't he?

How come Ricky Garard is still placed 3rd on the Games leaderboard?

youtube.com Briggs talks about her coaching philosophy, roster changes and the importance of communication.

“Road to the Games” with Kari Pearce, Camille Leblanc and Jamie Greene 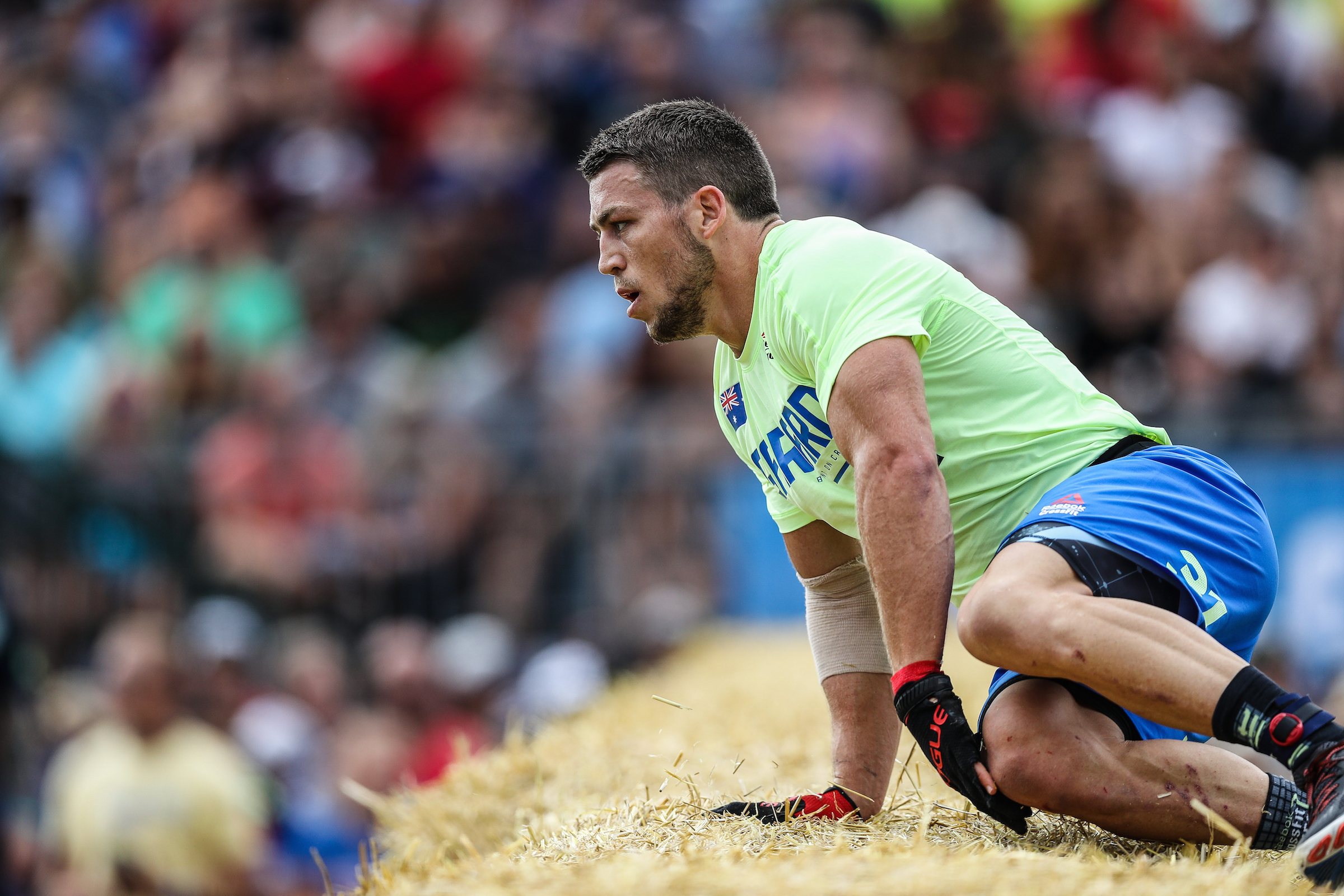 You can get your Games Farmers Walk Handles for $850

Train with The Good Dudes in Paris, this autumn

Watch: Madison over Carson for the CrossFit Games?! Agree or disagree?

The Best way to BUILD POWERFUL LEGS for Crossfit - YouTube

Who will win the Games this year?

Who do you think will be the winner in individual men? What about women?